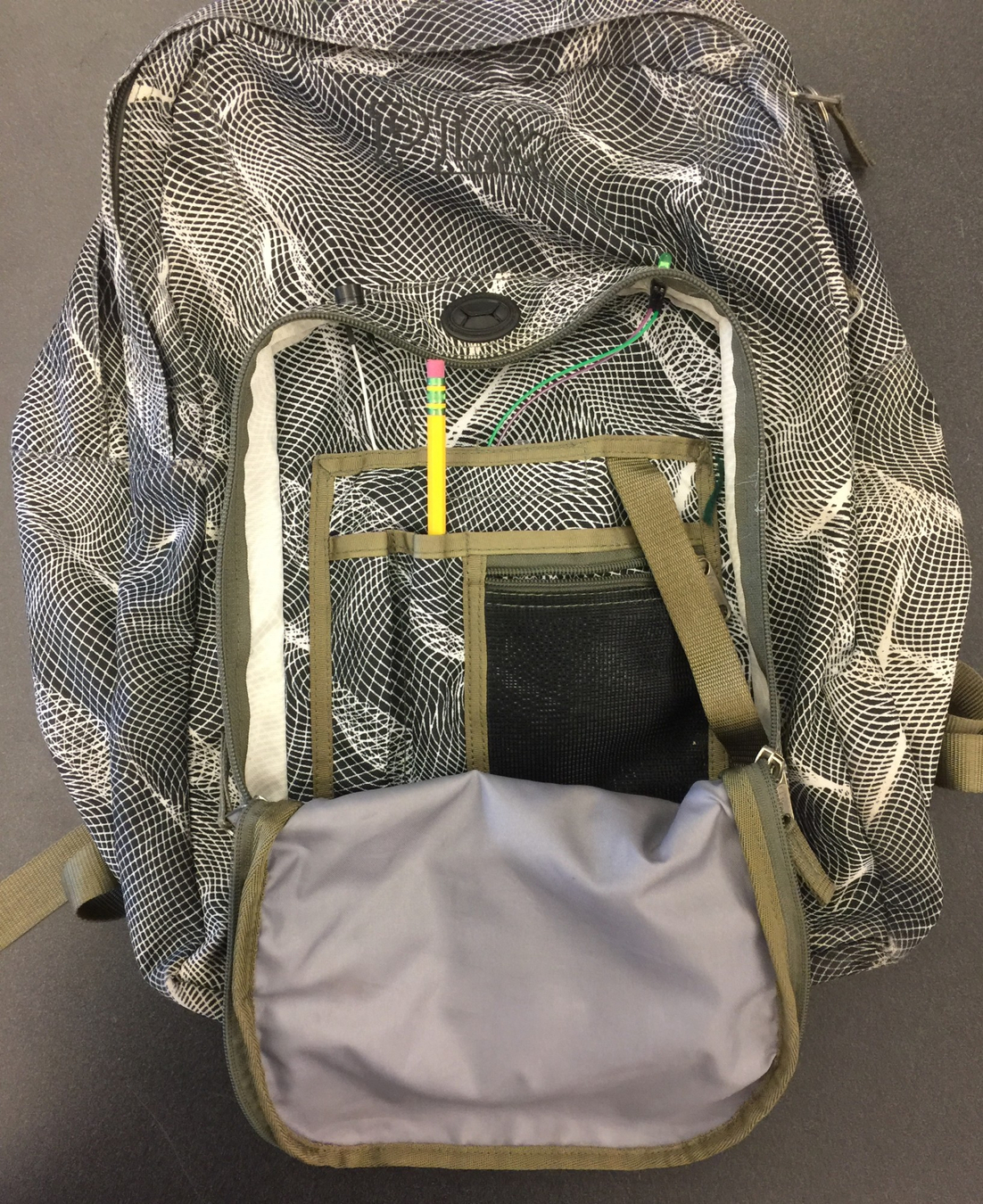 The Finders Keepers is a backpack that keeps track of the pencils, calculators, and other common objects and alerts users when those objects are not returned to their spots. The backpack has small rectangular tubes tucked in the pencil pockets that detect whether a pencil is in them or not, as well as multiple other compartments for multiple other objects. The tubes and compartments are connected to a Particle Photon microcontroller that is able to light up an LED, set off a buzzer, or even send a text to a user’s phone in order to notify them that one of the items in the backpack is missing. The Photon is connected to a battery pack that, when placed on a Smart Charging Mat, is able to wirelessly charge. The Finders Keepers makes sure users don’t have to worry about remembering their stuff. It's 4th block on a Tuesday, and your teacher announces that there is a Pop Quiz today. You scramble through your bag just to discover that you lost your only pencil. You remember having it last class, but now don't know where it is. You ask around to see if anyone has an extra pencil, but no one does. This means that you have to resort to asking the teacher. She reluctantly gives you hers while asking you why you aren't prepared. Every class, it seems like someone loses a pencil. They show up to the next class, just to ask for a pencil from a friend. This problem sparked our idea for the Finders Keepers.

The original “post-it note” idea for the Finders Keepers looked something like a pencil case with slots for multiple pencils. It would display the amount of writing instruments in the box before and after class. This was used to see if one was lost. This solution didn’t last very long since the box would still require a task for the user to do, specifically a button that when pushed would tell the Arduino whether the pencil is there or not. As we looked further into pencil holding devices, we saw that some were clip-in and some were slide in (like the small pouches inside many backpacks).  We decided on pursuing the slide in design.  This design would be implemented into backpacks. After giving up on the push button Idea we needed to come up with an automated system. We decided on two metal pieces that if they are touching/not touching could determine if the pencil is there or not. In addition to the help for the users, this design is simpler and easier to make”

Before settling on our backpack design, we talked with potential users about the box idea. From this, we realized that a box would be a hassle to carry around. In addition, they mentioned that most people don't use pencil cases and didn't have any intentions to use one. As they thought it wasn’t worth taking out the bulky, box out of their backpack every time they wanted to get their pencil. Instead, potential users found that simply sliding their pencil out from a pencil pocket was much easier for them. Taking this into consideration, we decided to modify the pencil pocket itself by placing a rectangular tube into it that the pencil would slide into.

At the moment, the Finders Keepers is a standard sized backpack - nothing special and nothing added or removed from it - with one rectangular tube to hold one pencil. The tube is connected to an Arduino which is connected to a buzzer and an LED hot glued onto the outside of the backpack. If we had more time we would build protection for the Arduino and connect it securely to the backpack.  We would also secure the wires in the pockets so that they don't get bent or disconnected.