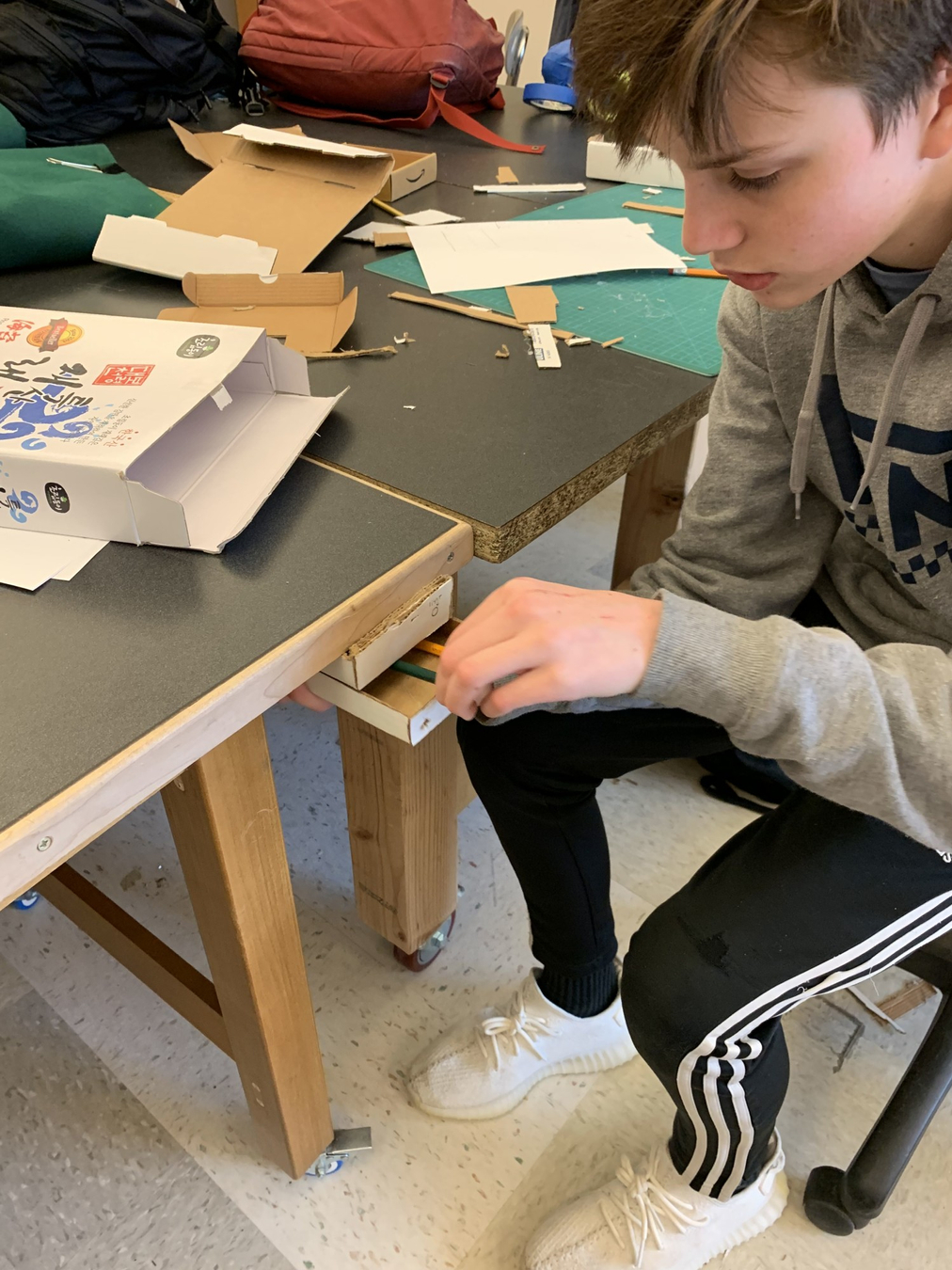 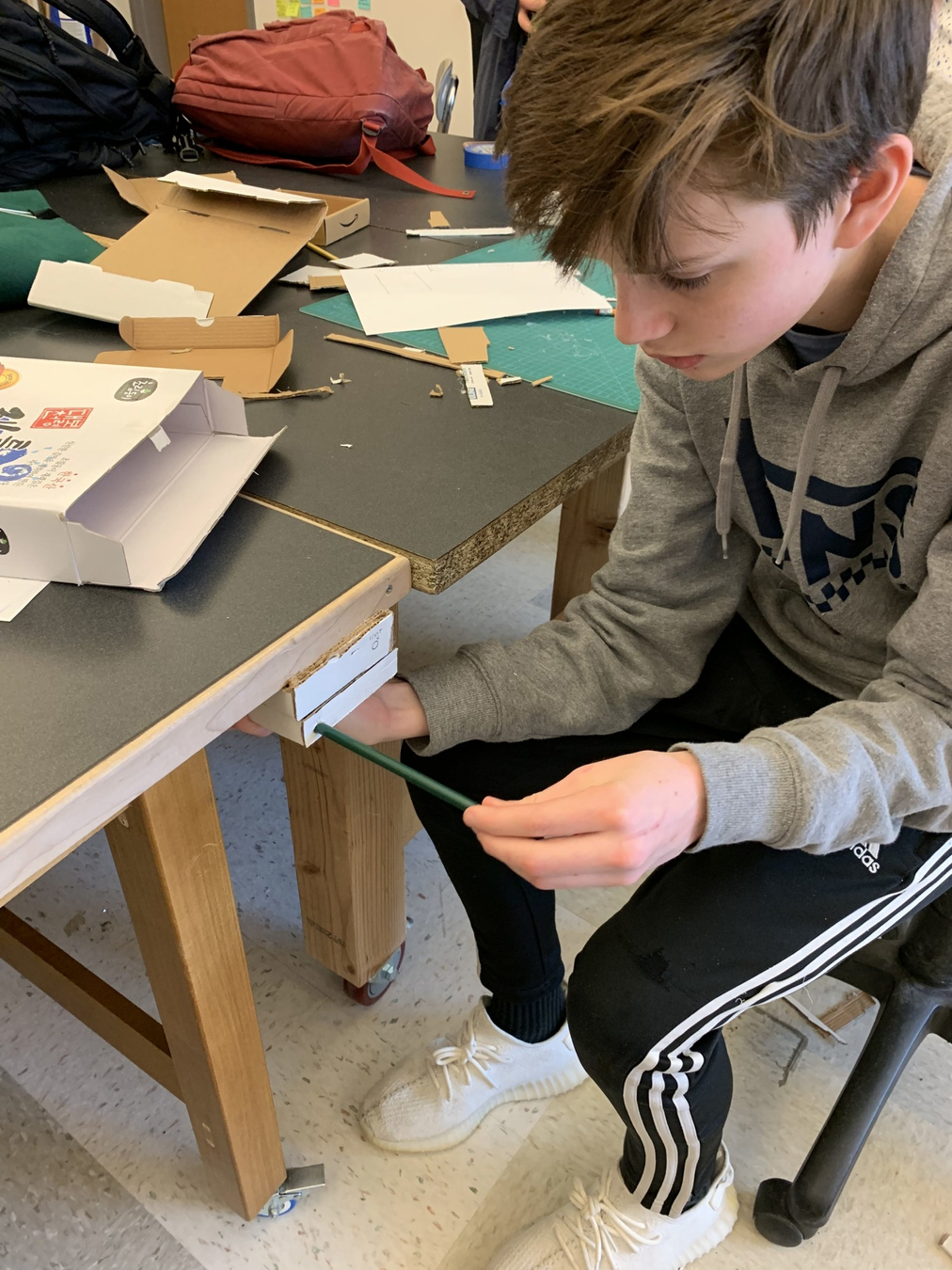 Pencils are a necessity in life and used for everything from doing school work to creating a blueprint for a skyscraper, but they always seem to disappear. This problem had us thinking, what if there was some way to keep track of your pencils so that you never lose them? That’s how we came up with the idea of Just In Case, a sleek, advanced pencil case that prevents the loss of your pencils for good through the use of sensors and alarms.

The path of innovation is known to be crooked, and the progression of our idea can easily show that. In the beginning, we started off with the idea of having a trading system for pencils in which, to get a pencil out, a phone or other valuable object was required to be inserted. Your valuable item would be locked in the system until the pencil was returned.

Once we thought we had the right idea, we created our prototype, and while at first we were very excited, we soon realized that there were a lot of issues surrounding the size of the box, the location of the box, and how people would be reminded that their belongings were still in the box. We chose to go to a classroom and asked a teacher what they thought of the idea. They told us that they couldn’t see how the box could fit at every desk and that it would create just another thing for the teacher to keep track of. After our meeting, we came back and made the decision to go out again to ask people what they thought was missing or wrong with the idea.

With that idea in mind, we interviewed people and explained our product idea to them. Many students were excited about finding a solution to this frequent and tedious problem in their life. However, they were less excited about having pencils available to them in the classroom and sharing the pencils with other classmates, mostly for fear of germs. Taking their opinions to heart, we tried to come up with a way for people to retain their individual pencils and keep track of them.

From our interviews, we found that most pencils are lost when they are forgotten and left behind in a class. People said they often noticed that they left their pencil only after they had already walked to their next class, and it was too late to go all the way back to get it. Our ideas to solve this problem included a big, flashing sign above the door that says “Remember your pencils!” Though we believed that would work at first, we inferred that people would soon grow numb to the sign and not notice it. The sign also was not needed when the pencil was actually in the box and leaving the room. We needed to find a way to alert the student only when the pencil was missing. We came up with the idea of a high-tech pencil case that could detect whether a pencil was present and only go off if it was missing.

Though very challenging, we went through the prototyping phase step-by-step. We investigated different kinds of pencil cases that were already sold in stores. When looking at different slots for pencils, we decided that we wanted a clip that a pencil would be inserted into. The pencil slots with pencils sliding in work well until the pencil gets too short; it becomes very difficult to get the pencil out of the slot. With our design, any pencil length could be held tightly. We used TinkerCad to create and design a clip to be 3D printed. We had to make it precise and accurate according to actual pencil width and circumference so it took a lot of trial and error.

Our first couple pencil clip ideas included the holding of a button in the clip itself. We wanted the button to be pushed when the pencil was inside the clip. With multiple revisions, we figured out an efficient and effective way to insert the pencil and have the button be pressed down. We can describe it as pencil taco stands with buttons in between the clips. We have two clips for sturdiness of the held pencil. Another benefit of the two separate clips is that when a pencil gets very short, it can just fit into one clip.

Now, we needed a box to put the whole clip and electronics into. Measuring pencil length, we made a basic box and laser cut it out of cardboard. We may have laser-cut over 5 boxes because of the error in our dimensions. We wanted the box to be as slim and sleek as possible while also fitting four pencils. We needed a comfortable space between pencils for a quick and easy putting in and taking out of the pencils. We also needed to figure out where to put the electronics (Photon, wires, vibration sensor, speaker, and LEDs). We considered extending the length of the box to include the electronics at the end of the box. Our other option was to increase the depth of the pencil box and let the electronics rest underneath the pencils. We decided to go with the latter option, deciding that we would rather increase depth than length. We designed our box to be “double decker” style, with a lower compartment for the electronics and an upper section to hold the pencils. Using Rhinoceros 3D computer-aided design (CAD) software, we successfully designed a box and laser cut it into first, cardboard, and then wood for the final product.

The electronics portion of the project was very complicated. We investigated different kinds of sensors including vibration, light, sound, distance and many more. After learning about how each of them worked, we decided the vibration sensor would be best to detect movement within a backpack. We had to do some more experimentation and data collection to discover how long it took for someone to pack up their belongings and leave the room. There is also a lighting system with small LED lights. The red light lights up when a pencil is taken out.  The green light will light up when detecting movement. The speaker plays a short song as a way to catch the student’s attention and alert them about the missing pencil.

The process for us to put together the electronics included soldering and connecting different wires. We connected everything according to the coded Photon. Surprisingly, the whole system worked on the first try! We put everything together and turned on the box with a flip of the switch. With our trials, we had finally finished the prototype of our new product.

We then had time to implement one more feature: We had the idea for the box to deliver a notification to our phone. We actually achieved this goal and successfully sent an “ut oh” text simultaneously with the alarm.

If we had more time, we would improve our product with many ideas. We could further improve the sensor. We found that the subtle movement of the backpack while walking was inconsistently picked up by the current vibration sensor. With more time, we could replace this sensor with a compass or accelerometer. This would pick up changes in speed or direction as a person moves around the room. This may be more effective and reliable to detect movement than the vibration sensor. We would also add in a charging system, maybe wireless, to make keeping the battery charged super simple.