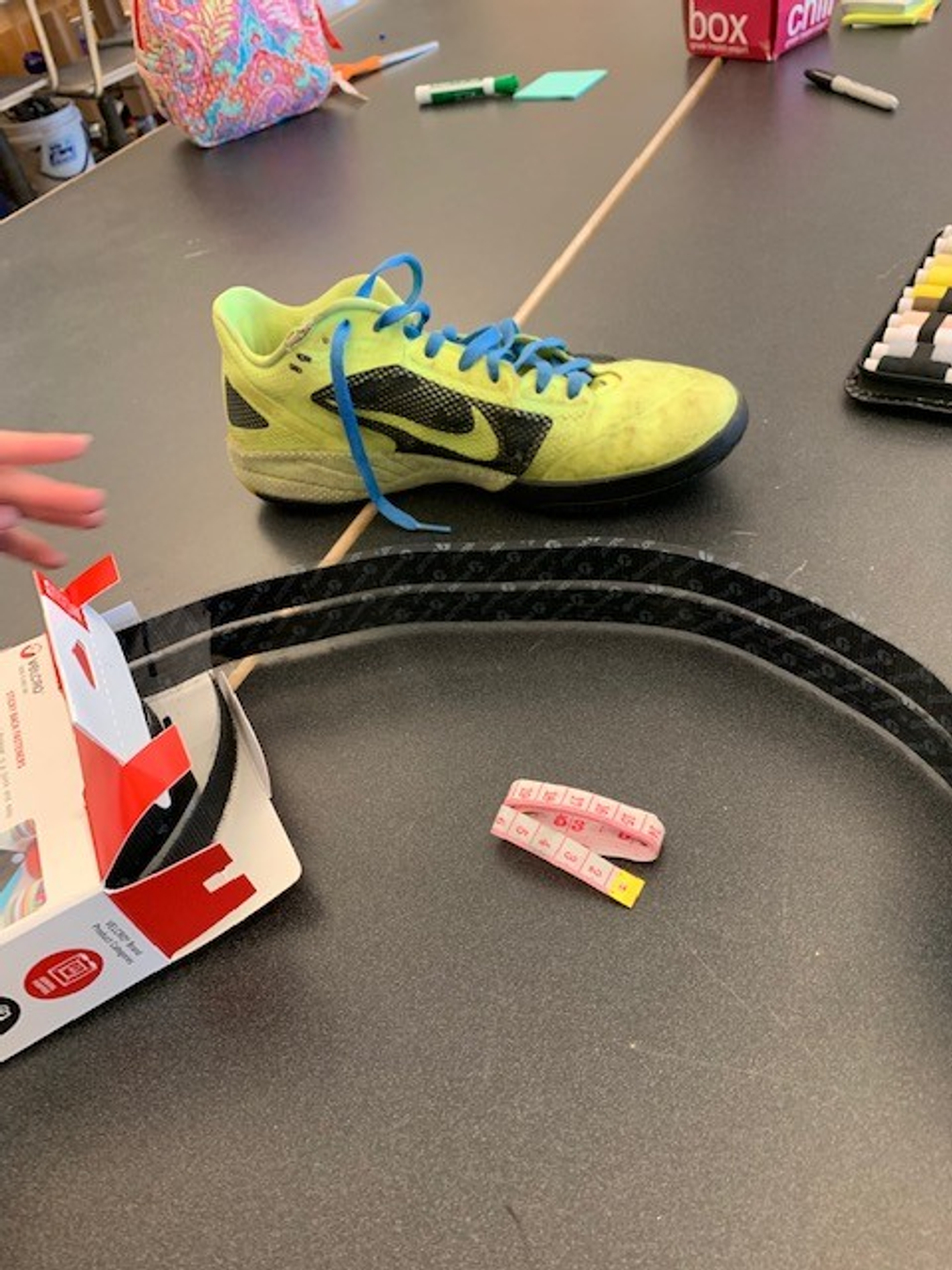 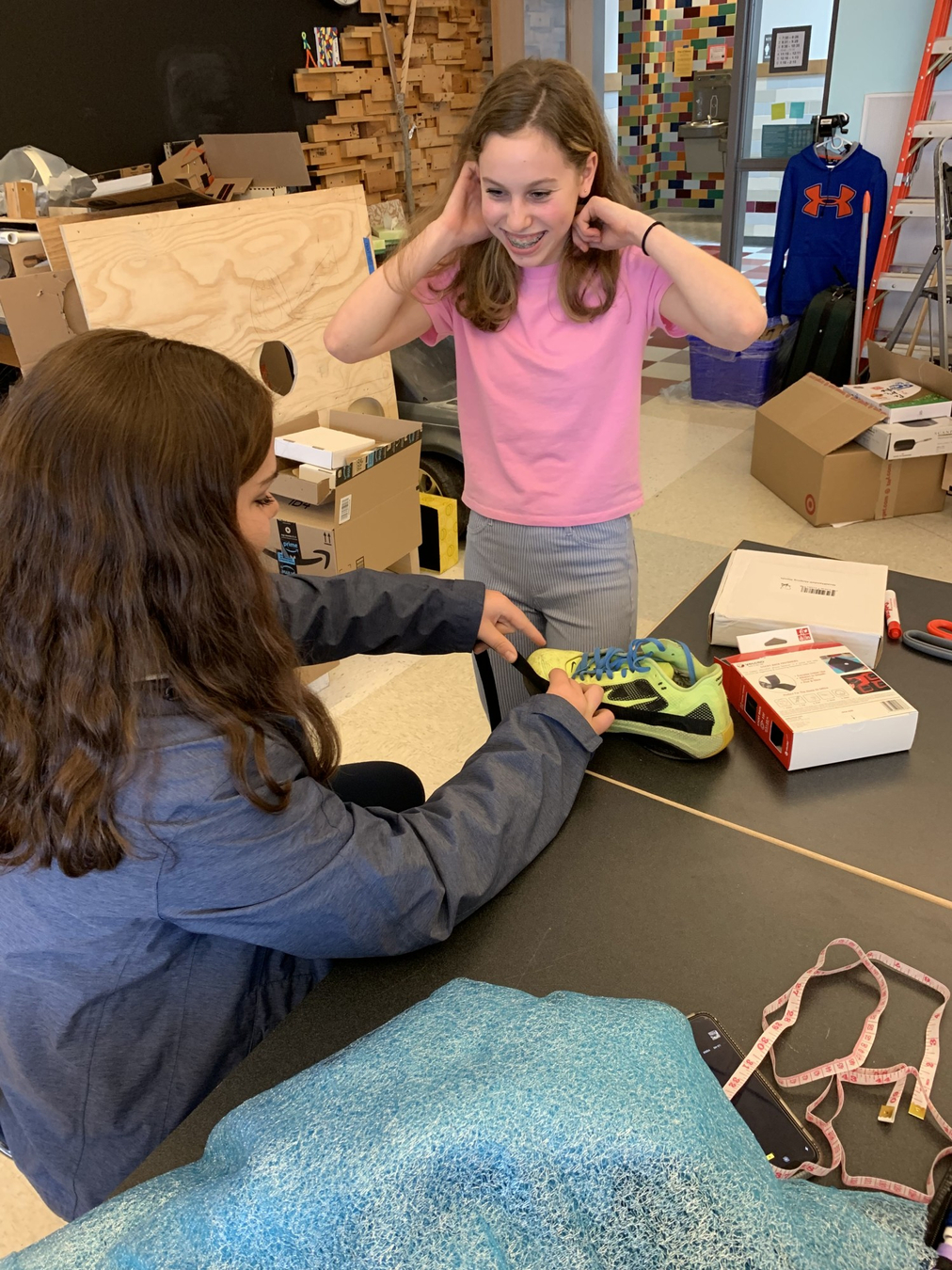 As we observed people around school and even talked to them about it, we learned that shoes being dirty is an issue that a lot of people struggle with. We decided that this was an idea we were interested in pursuing. Mainly for teenagers, there is a struggle of getting your new expensive shoes really dirty. Whether it is a white shoe that you want to maintain the fresh look with or your nice ballroom shoes, we took on the mission to solve the problem.

The project originally started out with 2 main ideas. The first idea was to have a peel off “face mask” for the shoe.  We thought this idea would work because it would be a quick and easy way to pull off all of the dirt found in the “pores” of the shoe. The substance would be applied onto the shoe, let dry, and then ripped off, which would take the dirt off with it. This would leave the shoe clean. This idea didn’t even make it to the prototype phase because many students we interviewed said, “that would be a hassle to use every time my shoe got a little dirty.” Unfortunately, our prospective users had the same reaction to our second idea, which was to have many layers on the shoe. There would be roughly 6 layers of the cover on the shoe, and when the top layer got dirty, it would be able to be peeled off, leaving a fresh new layer under it. This idea ended up not being very well liked; students said that they would not really use the product, so we decided not to spend time making a product that people would not use.

After getting the feedback, we debriefed with Mr. Moody about what the students said, and a new idea appeared. The idea was to have a “base shoe” that doesn’t have a design on it. Then on top of it, there would be a cover for the shoe that would have any style you want. This way, you would only have to buy one base shoe and then you could buy a bunch of different (relatively inexpensive) covers. These covers could be any style you want; one could be Converse, another could be Ultra Boost, and another could be dress shoes. The possibilities of the shoes you could wear are infinite. When you were done wearing a certain cover, or it got dirty, you could simply throw it into the washing machine to make it clean again.

But how could we securely attach the cover to the base in an attractive way? The first idea of attachment was velcro. After testing the velcro, we discovered that it did not work very well. The fabric cover was bunching up in certain places because of the velcro and didn’t sit flat.  In the end, we decided to ditch the idea of velcro.

Next, Mr. Moody came into class with a can of spray on rubber. We thought this idea could work well because it would be an easy and quick way to make new layers. Once we read the instructions on the can, we realized that it was a difficult task to carry out. It would require many layers and hours of drying, and it didn’t seem like the rubber would peel off of the shoe without tearing, so we ended up moving on from that idea.

After that, we came up with the idea to use a ziplock bag zipper, so that you could zip the cover onto the shoe. We cut up the ziplock plastic bags so we were left with only the strip of attachment, and we glued one side on the shoe and the other side on the fabric cover. We tried to attach them together, but once again, we had the issue with the fabric bunching up.

Next, we were trying to solve the issue of the fabric bunching up, so Mr. Moody brought in a bunch of shoes for us to cut up. We ended up cutting the top part off of one shoe, and we used it as a template. This was a true breakthrough in our project because before, we were simply drawing an outline on the shoe and then tracing it onto a different piece of fabric.

After that, we had the idea to create a system where there are hard parts that protrude from the fabric piece, and they would snap into place on the base of the shoe. We prototyped this by using 3mm 3D-printer filament to push it into notches that we cut into the base shoe. We never finished creating this version of the product because we found other products that we thought would work better.

Eventually, we decided that we could possibly make the product work by using a 3 part system. There would be the base, the cover, and the rubber strip that would go around the side of the shoe, on top of the attachment method, to make it look cleaner and nicer. We didn’t really like the idea because it seemed like too many pieces, so we dropped it.

The next week, we came back into class and decided to make a weave in the shoe. The shoe base itself and the cover would have holes in it that line up with each other. You would weave a leather cord or some type of attractive string through both the cover and the base. The string did not hold the cover tightly to the base in all places, and the string was difficult to weave through the holes in the front of the shoe, so we decided that there were too many cons to this prototype.

As a next try, we brought in a sticky cover and stuck it onto the shoe and it looked great. It did not solve the main problem that we wanted it too (making sure that the shoes stay clean and the covers are reusable), but it made it so that you could have many different styles of a shoe. You would also be able to just throw it away when you are done because it is cheap. We thought this idea wouldn’t sell well because it wouldn’t be environmentally friendly, and it also causes people to have to buy many of these covers in short periods of time, which isn’t very efficient.

Next, we decided that we should rethink the idea of having three separate pieces. We had the cover, attachment piece, and base. We decided to use white duct tape to simulate a nice attachment piece, and pierced the tape with a series of push pins. The duct tape wrapped around the side of the shoe and the pins pushed through the cover and into the base so that the cover was held in place. This product could have been a home run, but we did not have the resources or time to make it work. If we had the time, I think we would have used some sort of plastic piece that you can insert into the shoe, and a nice piece of fabric to go along the side of the shoe (instead of duct tape).

Finally, after speaking to Mr.Moody, we can up with the idea to have a stretchy band around the edge of the shoe cover. This would fit perfectly around the shoe. We prototyped this by first using the soldering iron to melt a groove in the rubber around the circumference of the base shoe. The band that was on the shoe cover would then fit into this groove. We put the band on the edge of the cover and sewed around it. In this first attempt, however, the band did not adhere well into the groove, especially in the front where the groove near the toe points up a bit.

If we had more time and resources we would keep trying with different prototypes. We would work more on the idea of having some stretchy material that was able to grab onto the rubber part of the shoe. We could also work more on the method of the 3 attachments: cover, shoe, trim. We would also use more expensive materials to attach the cover and make the product work. Finally, we would talk to a shoe expert about how to get clean edges on the fabric and make it attach cleanly all the way around the shoe.