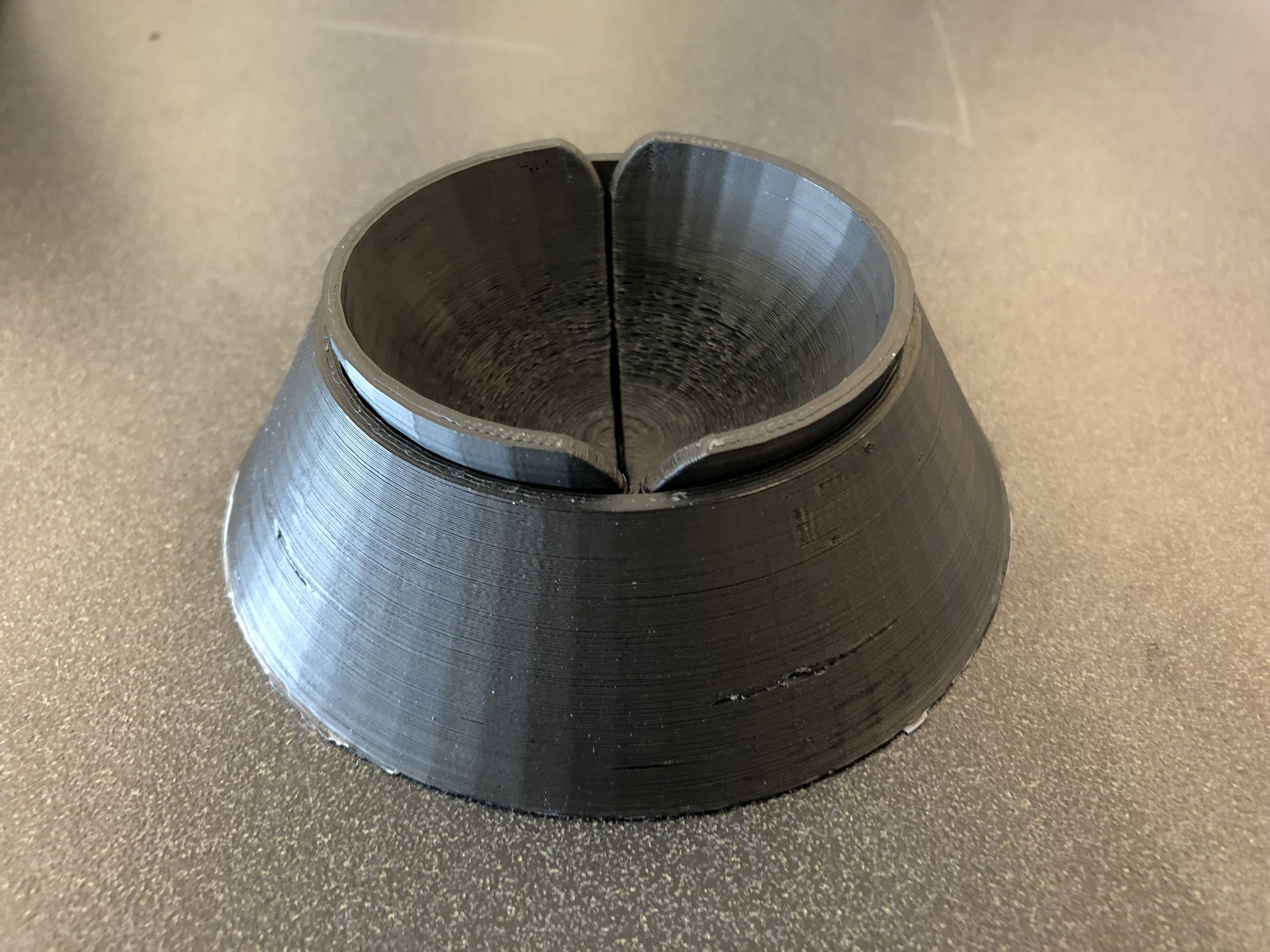 On the long and challenging hike from your sink to the spot in your house where your dog drinks, it is difficult to keep the water in your bowl from spilling over the edge. Water almost always ends up on your floor, becoming both a hazard and a pain to clean up. The idea of fixing this problem came to us when one of us was filling up his dog's water and walking back to put it down. We thought, “Why has nobody fixed this? Surely, someone must have.” We searched for any existing solutions, and found that nobody had solved this very common problem.

We visualized our first designs on a piece of paper. We had the basic idea of two bowl halves with handles inside of an outer bowl. To help us envision a 3D version of our design, we cut up plastic ball-pit balls (think Chuck-E-Cheese) into hemispheres and then cut one of those hemispheres into quarter spheres. Then, we placed the two quarter spheres into the hemisphere, forming an inner hemisphere, and stabbed thumbtacks through at the corners of the hemispheres to act as the pins holding them together. The cuts were pretty imprecise, so we knew we had to get some 3D prints going to get a true idea of what it might be. We also realized that if the walls were going to slide up the side of the bowl side by side, they would need rounded corners to prevent them from bumping into each other.

Our first 3D print was a design that simply consisted of the bowl halves and the outer dog bowl. We just wanted to see how the geometry of the design would work; there were no holes, screws, or even handles. After seeing that the sides slid up well using our hands, we tried to improve on that idea, adding handles and notches in the edge of the bowl for the handles to sit. We also added holes in the corners of the bowl halves and in the side of the outer bowl so that we could put pins in the sides to secure the bowl halves inside. In our initial process, we printed scaled-down versions of our designs so that we could get out prints more often —  the smaller the design, the faster it prints. However, it was still very hard to print out because it was difficult to figure out which orientation to print the bowl halves while keeping them 2-3 millimeters thin. When our second print came out, we straightened out two paper clips and slipped them through the adjacent holes just to test it quickly. It seemed to work fine with the paper clips; however, water was leaking out of the holes because the paper clips could not fill them. Thus, we tried it with screws. It was not until we put in the screws that we knew this design would not work. We realized that with the screws in, the walls wouldn’t go all the way up the bowl and meet at the top because they were not turning at the center point of the bowl. This was a huge blow because now, we had to completely redesign the bowl and the walls so that they would function geometrically.

Now that we were back at square one, we had to think of new ideas to get the Slydog to function correctly. We tried a sort of ‘Grand Canyon’ idea where there would be a groove cutting through one side of the bowl to the other. To work with the canyon, there would be a small peg on the bottom of each bowl half that would slide along the canyon so that the circles would be able to rotate all the way up the bowl. However, we discovered that this would be very hard to construct with 3D printing, so we decided to try one of our ideas that we had formulated earlier.

The design was the same dog bowl with two walls that would slide up to stop water from spilling out, but this time the bowl halves would have overlapping tabs on their corners so that the holes would actually be in the center of the sphere, allowing the walls to slide up the bowl from a center point. In addition, there would be tabs sticking up from the edge of the bowl on two opposite ends. Mr. Moody helped us to make a 2D model that would help us think through and quickly visualize the geometry of the eventual 3D model. This was initially a cardboard model that had a bowl piece, a wall piece, and a piece holding them all up, and then we utilized our laser-cutting technology to construct a more precise wooden version. This model clearly displayed that this idea’s geometry would indeed function, so we got to work.

Within one night, we had composed the new design on Tinkercad. This design had one bowl piece with two holes in it, two wall pieces with tabs that had holes in them, and two 3mm screws. After many failed printing attempts (even with support structure, the geometry of the objects made them challenging to print), we finally had two working walls to go with the bowl. We assembled the bowl and put the screws in, and it worked perfectly. The walls could slide up and down the bowl without getting stuck on the walls. The handles met at the top so you could carry it with one hand at your side and not worry about spillage.

Although we succeeded in figuring out the geometry, the project of the Slydog is not over. We noticed minor spaces from which water could leak out, and we have already thought of potential ways to solve this problem. We would elongate the walls so that when the bowl halves are sitting in the bowl, they are slightly below the level of the bowl. This would solve the problem of the slight gap that is left when both walls are up. Another problem was that the walls didn’t have any stopper, which meant that they could rotate over the center point and create more gaps. For this problem, we would look back on one of our designs -- the one we called the grand canyon. We would integrate this into our current design to make an actual stopping point for the walls so they don’t over-rotate. The resolution of these two things would lead to a perfectly working product. After completing these tasks, we might even try to seek a patent for this design.