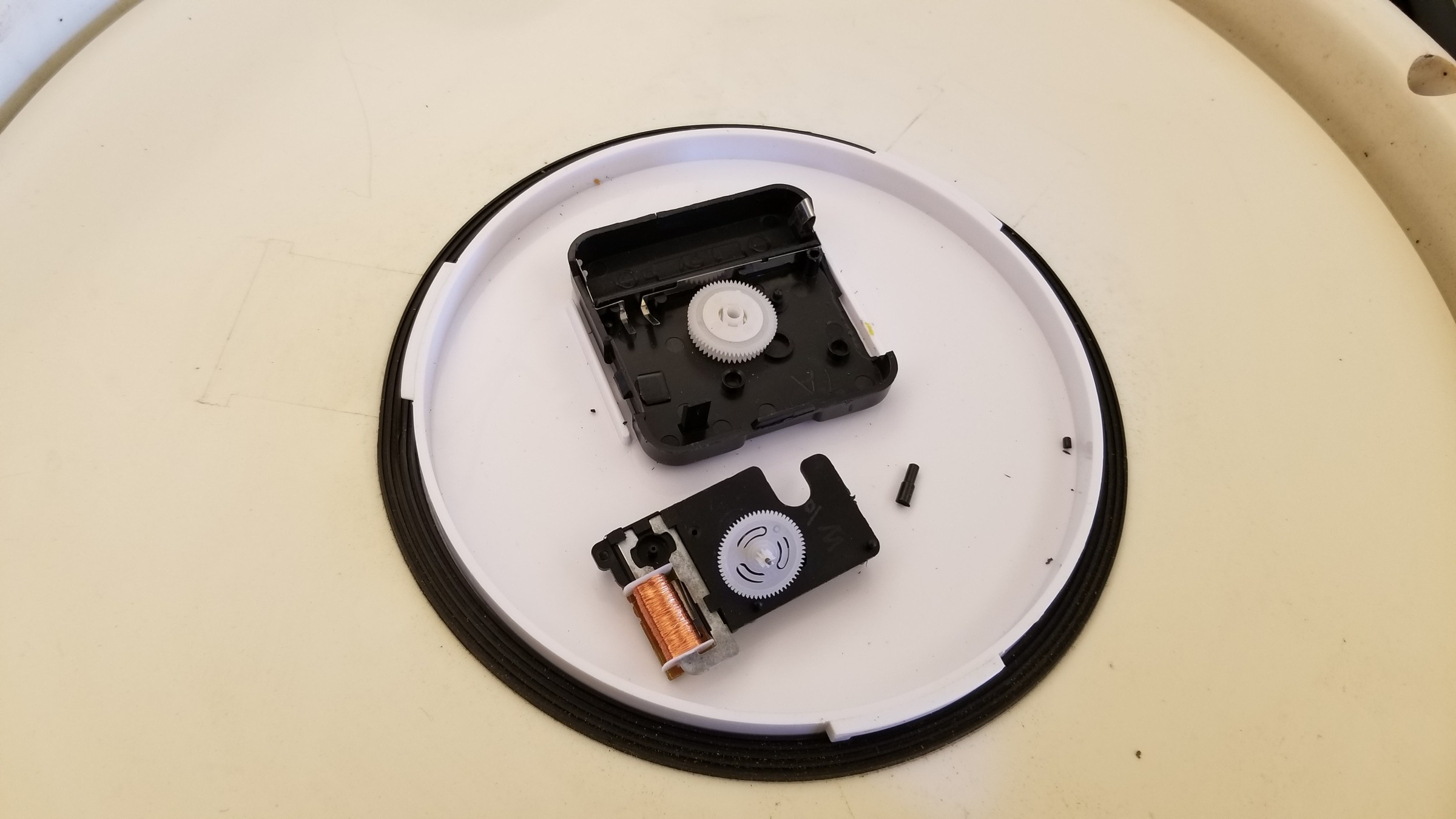 Mathematical π is taught as every other subject is in our current schooling system; it's done through a process of routine memorization and regurgitation. This inflexible and outdated form of learning is what sparked the idea for the Archimedes Timepiece. The idea for the ATP did not come out of nowhere though, it came from ideas that were circulating throughout the class environment as the semester ran on. In the earlier stages of the class, the teacher addressed the students and asked a very simple mathematical question; if it takes one hour to walk across the circle how long will it take to walk around it? The answer to this is elementary — it's 3.14 hours. But arriving at this answer wasn't so easy for the class, as we struggled to remember what equations’ values were to be used when dealing with circles. What we had forgotten about, of course, was π itself.

The idea for the ATP at its core was formed when the class started to try and find a way to best represent π through everyday objects. Interestingly enough, there weren't very many incremental steps in between, as the project in whole consisted mainly of a coding aspect and not a physical build process, but that doesn't mean there wasn’t a first prototype. The original build was very simple; essentially it was a cardboard circle, singular led lights stabbed into the circumference of the cardboard, and poor markings of where each hour was. Later ideas built upon this even into the final, but there was unfortunately one feature which was impossible to implement due to the lack of time and resources. That feature was the ability to make the hour hands move while also being lit up with LEDs. That doesn't mean though, that that cannot be implemented in later versions of the ATP.

Luckily though, after a large amount of trial and error with the software and getting the right LED pattern to show, I was able to make a relatively clean looking build, with the LEDs wrapping around the outside of the wooden and cardboard frame and along the diameter of it as well. In the end the ATP boiled down to an old plastic shell of a worn out clock, a circle in the center comprised of a slab of wood and cardboard glued together and then into the plastic shell, and the NeoPixel LEDs wrapped around the outside and down the middle as previously mentioned. In the end the first official prototype of the ATP was complete and ready for it's demo. 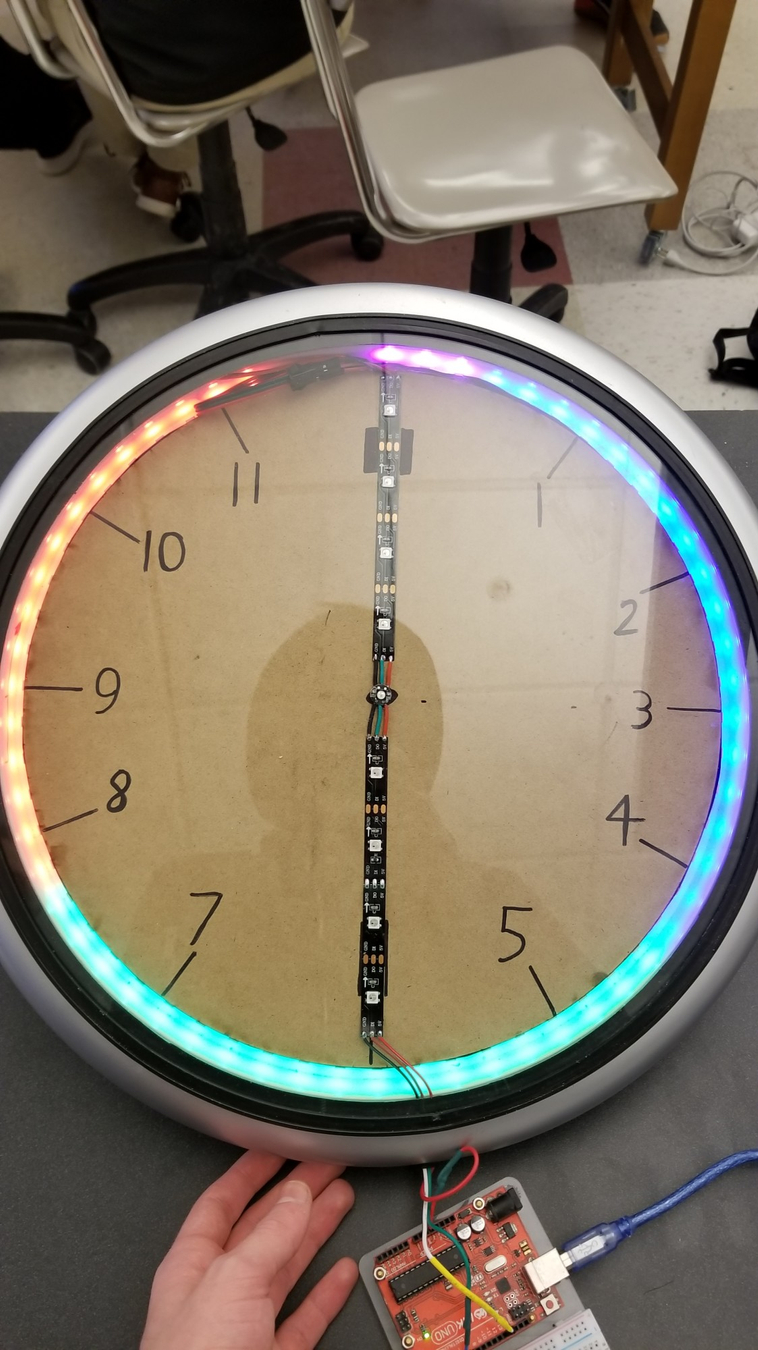 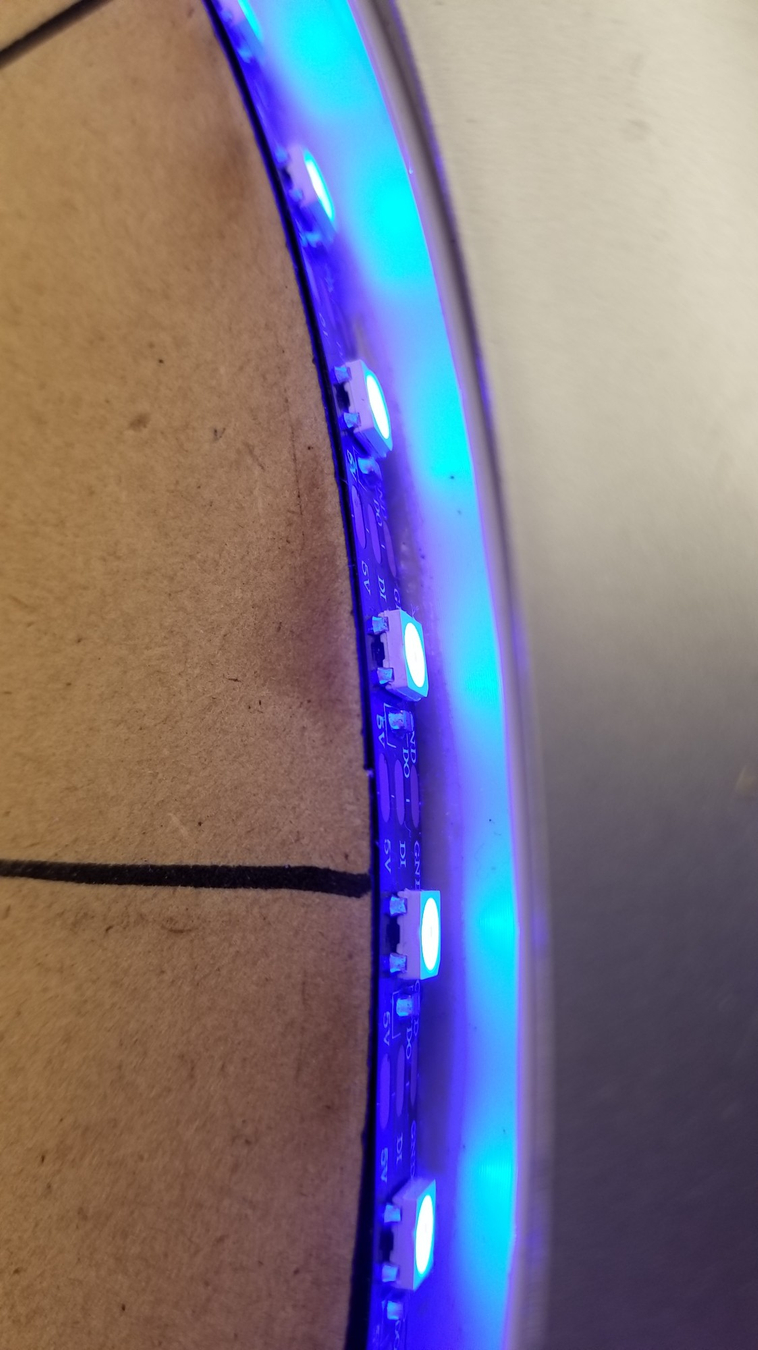 The Archimedes Timepiece is a clock made for a learning environment; it is made to visualize the mathematical concept of π through colorful and vivid LED-generated imagery. The clock is comprised of three main parts: the frame of the clock itself, the NeoPixels, and the Arduino microcontroller which tells the LEDs how to perform the fantastic light show. The Archimedes Timepiece, or the ATP for short, is designed for a classroom; it's made to not be something that will steal all of a students attention, but it is also not made to be ignored. The clock itself works in a simple manner; two light strips work as its hour and minute hands, and one long strip wraps around the circumference.

These LED light strips are the key feature of the ATP, and they are what present the light show visualization of π that works like this: When the hour and minute hands line up, they form approximately the diameter of the clock.  When that happens, the clock illustrates that the diameter is about ⅓ of the circumference by having the lights march from the straight hands around the perimeter of the clock three times, lining up in three different colors.  And then finally a fourth bit appears to show that it takes a little more than three times the diameter to complete the circumference. Math and geometry classrooms fitted with the ATP will see there are students interested in the device, asking what it means and how it works, leading to them having a greater understanding of π.